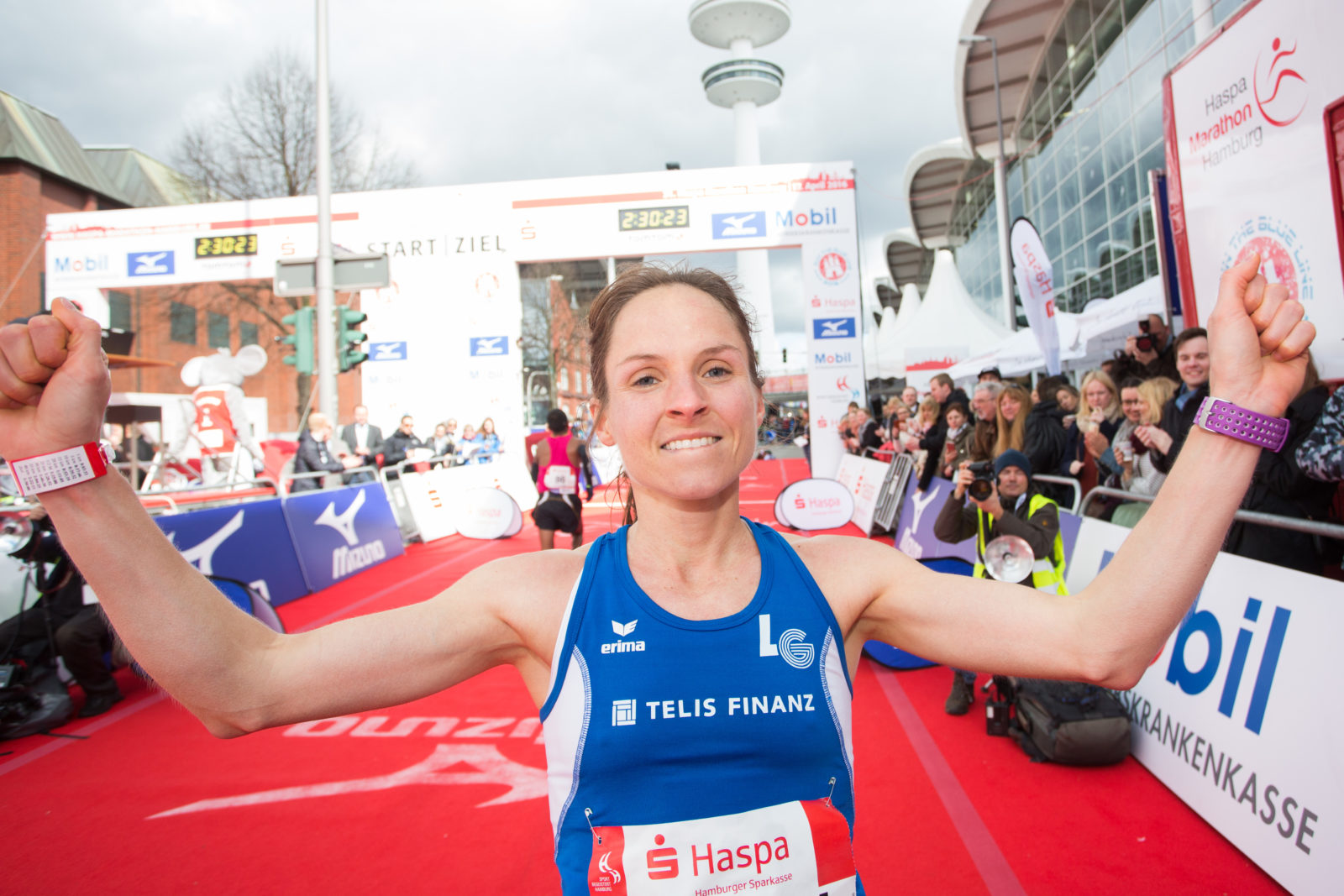 The success of Anja Scherl in the Haspa Marathon Hamburg on Sunday is a refreshing reminder that an athlete, by virtue of their own application, support of those around them and ambition to represent their country, can combine high level training with a full-time job to achieve results which astonish even themselves.
By running 2:27:50 to finish third in Hamburg, Scherl took an astounding 8:41 off her previous best, set in the same race a year ago and made herself a virtual certainty when the German selectors announce their Olympic Marathon team for Rio in May. Her target beforehand had been to run under 2:30 and put herself in contention for a team place, but her performance on a day when strong winds made the latter stages far from easy was a further revelation in a year of impressive progression.

Having improved her marathon times from Hamburg 2014 by just over 20 minutes, the 30 year old Scherl is fast making inroads on the German long distance charts. The last time a German woman finished as high as third in Hamburg was 2009 and that was the former European champion Ulrike Maisch with the considerably slower time of 2:34:28.

Strong improvements in athletics can lead to suspicion these days, but the story of Anja Scherl’s rise points to commitment, ability and planning. Working 40 hours a week in a software company alongside such high level training demands skills of time management not only from Anja but her partner and coach, Marco. They have clearly found the right balance. While she can at times work from home, a regular working day entails getting up at 0545 and finishing work by 1600 before training.

The goals this year have been twofold, securing a place in the half marathon for the European Championships in Amsterdam in July, then fulfilling her dream of the Olympic Marathon.

“Last year I ran the “B” standard in Cologne for a team place in the European Championships but the competition is tough in Germany for team places so I was determined to keep my place. My target of running in the Europeans and wearing the national vest was my big dream, that was my motivation.”

She achieved that in style, benefitting from her first ever winter training camp by running a personal best of 71:11 in Barcelona on February 14 this year. This performance clearly indicated that a big improvement on her 2:36:31 from Hamburg last year was on the cards. She went with the early fast pace this year, preferring as before not to have a designated male pacemaker.
“Last year I found myself in a group which suited me in terms of pace so I went with them. This time was similar, there was always support from somewhere, a man would provide shelter from the wind. Sometimes I think people are too fixated about having a pacemaker assigned to them. I think it’s important to listen to your body.”

Such an approach is also the reality of championship marathons. Numerous women are capable of clocking fast times with male pacemakers in big city races, but some appear lost when faced by the reality of competition without pacers.
Having made a breakthrough with her personal best for the half marathon in Barcelona in February, the omens were good for a big improvement at the marathon in Hamburg.

“The signs were there in the build-up, following my half marathon, but I never imagined this kind of improvement.”
Her time of 2:27:50 also makes Anja Scherl the second fastest European woman in the marathon this year. She lacks nothing in incentive as she returns home to Bayreuth in northern Bavaria to resume training. The trip to Amsterdam for the European Championships is already booked but she’ll wait till the selection announcement before starting work on her Olympic Marathon plans.

Germany’s Arne Gabius has become a standard bearer for European marathon running in the past two years, breaking the national record with 2:08:33 in Frankfurt last October to give a strong indication that he could be a leading finisher in the marathon in Rio. Now Anja Scherl has provided the rest of Europe’s women with another fine example.

Text and interview by Race-News-Service