Here you will find important information about the Haspa Marathon Hamburg Relay 2021.

There are no parking facilities for cars and buses near the start and finish area, we strongly advise to use public transport.

The best way to reach the event and start / finish area is by subway line U3 to station Feldstraße or St. Pauli

The bib ist non-transferrable. It is to be worn clearly visible on your chest and mustnt’t be changed or altered in any way. Specifially the writing as well as the barcode area are not to be altered. Any changes my lead to disqualification!

There is an “emergency-pass” on the back of your bib. Please make to sure to provide the required personal details as well as a local address (hotel, telephone number). Please use a biro.

Relay Teams will additionally be given bibs with the word “Staffel” on them (German for Relay). These bibs are to be worn on your back.

While crossing the finish line, your individual certificate will be uploaded onto our homepage. Please bear in mind that these are only preliminary results. The results will get reviewed and become confirmed as official results approximately one week after the event.

Your own personal certificate is available for download as part of the online results service.

The following classifications will be carried out as part of the Haspa Hamburg Marathon Relay:

Re-registrations for the 4 runners are possible free of charge until April 12, 2020 via the user account of the relay team.
From September 5, 2021 changes for the 4 runners will incur a one-off service charge of 10,- EUR and has to be made on September 10 or 11 at the accreditation area.
If you want to change the team leader you have to pay a transfer fee of 21,- EUR. Team leades can only be changed until September 5, 2021.

The Haspa Marathon Hamburg Relay will be on September 12, 2021.

The individual distances making up the relay are as follows:

The handover points are all located close to stations of public transport, so that relay runners 1-3 all have the opportunity to make it to the collection point (“Am Sievekingsplatz”) ca. 400m before the finish in time to enter the finish as a complete relay team. 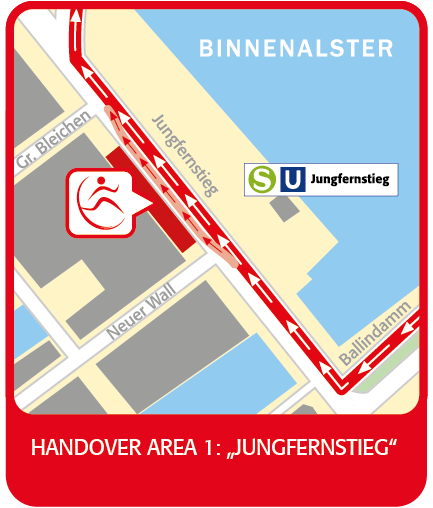 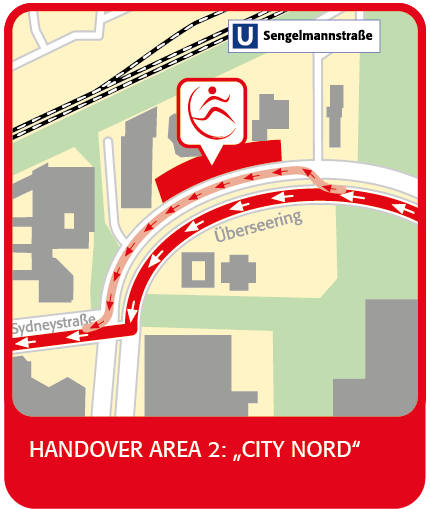 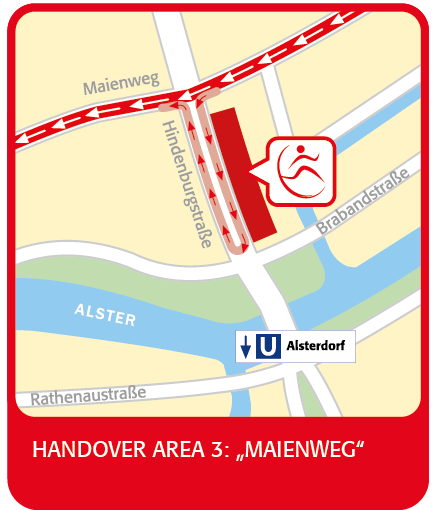 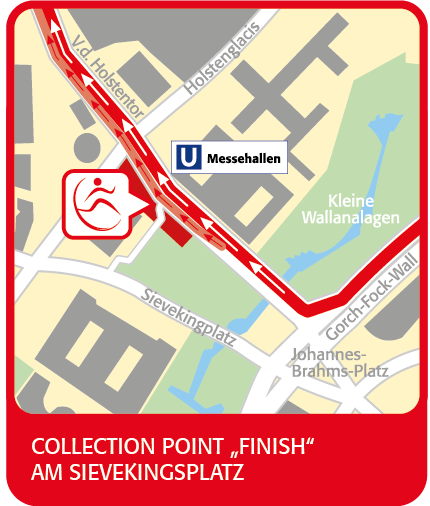 You will receive 4 medals after the finish upon handing in your rental ChampionChip.

The medal engraving can be booked as part of your registration for a discounted price of €34.00, in which case you will then be able to find the respective voucher attached to your bib.

Here you can find the General Terms and Conditions for the Haspa Hamburg Marathon Relay.

Please plan ahead and remember to leave enough time to make your way to the handover points respectively! 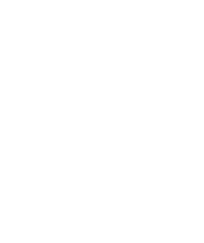 Find your perfect accommodation with our hotel partner Hamburg Tourism – and make sure you get the best hotel deals for your marathon weekend in the city.

The athlete accommodation will be at Radisson Blu Hotel – in proximity to the starting line and perfect marathon service.

We recommend that all relay teams use the following system with regards to their kit bags for the reason stated above:

Runner 1 drops off his kit bag containing his own pre-race clothes as well as the post-run clothes of Runner 4 within the Athletes Area. The post-run clothes that he would like to change into are given to Runner 2 (who takes them to handover point 1). When handing over the relay baton (Chip) inside the changing zone, the runners then also exchange the kit bag on their own.

First aid stations will be set up at regular intervals along the course. In addition there is a large first aid center in the finish area.

The Official Relay-Marathon running shirt can be ordered for 31,- € (plus 4,90 € shipping costs)* during the registration process (only in connection with the respective booked competition).

Ordered shirts will be sent by mail to the postal address given at registration. The shipping costs are 4,90 €.

*Order only possible throughout Europe.

The Relay running shirt is available as UNISEX version in sizes:

Relay marathon teams receive a quantity discount of 3.50€ per shirt when ordering a closed set of 4 by the team captain.

Our Service for you

Your relay entry fee will get you the following services:

If you have to stop the race, you can take one of the ambulances at the end of the field or the subway to the finish (U3 St. Pauli/Feldstraße).

In case of a medical emergency, the DRK runner information will give you information about participants who had to stop the run for health reasons.

Refreshments on the Course

Usually there are refreshment stations every 5 km on the right side with refreshments in the order:
Self-catering – carbol mineral drinks – Tubs with water for refreshment – Hamburg well water (in cups) – Bananas (from km 10) – ENERVIT energy gels / (from km20) – Cola (from km 25) – Electrolyte drinks*.

Upon successful registration you will receive your registration confirmation. You will then receive offical confirmation of entry with your personal start number until the beginning of September 2021. If that is not the case, please contact us using the official contact form.

Each relay team is given a real-time ChampionChip for timing purposes. The chip also functions as the relay “baton” and has to be passed on from one runner to the next. Please attach the ChampionChip to your ankle with the provided strip. There will be contact mats at each handover zone which you have to cross before handing over the baton.

Portable toilets will be available at the starting area, the Athletes Area as well as at every km along the way. We strongly ask you to use only these facilities, even if you have to wait for a longer time. Please spread out when lining up for the toilets to shorten wait times.

In addition, there will be portable toilets at all handover points also.

CAUTION: Unfortunately, the past has shown that numerous participants repeatedly do not adhere to this rule. Due to the requirements of the police and the numerous complaints of the residents, we want to advise you that public urinating is a regulatory offense. Anyone who does not comply with this rule can expect a police complaint!

Each relay team will receive a rental ChampionChip for timing purposes. This chip also functions as the relay baton that has to handed over from one runner to the next. Please use the velcro provided to fasten the chip around your ankle. There are timing mats located at the start of each handover zone that have to be crossed in order for the time to register.

Relay teams receive their 4 finisher medals at the finish upon giving back the rental chip. The chip-return/medal handout is located at the exit from the athletes area. Please hold onto your receipt for longer than just the event weekend – ideally until the end of the year. Should you forget to return the chip, you can also send it via post to the organiser within two days after the evend. Rental chips that are not returned in due time will result in a charge of € 25,00.