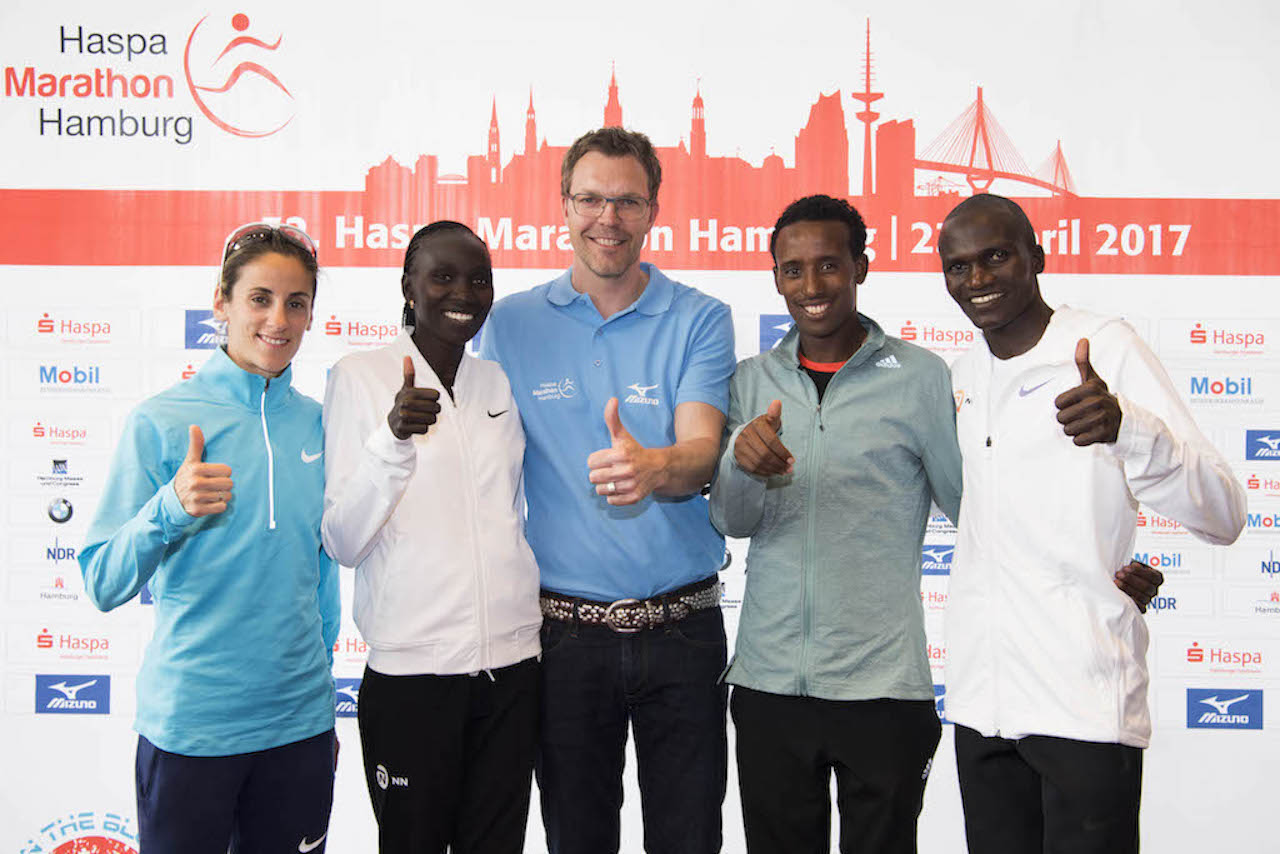 London’s Olympic Marathon Champion Stephen Kiprotich is ready for a fast race at the Haspa Marathon Hamburg on Sunday. The 28 year-old from Uganda hopes for a 2:06 time in Germany’s biggest spring marathon. And he insists that his friend and training partner Eliud Kipchoge would be happy for him to break his course record. Back in 2013 Kipchoge won his debut in Hamburg, bringing the course record down to 2:05:30. While he is one of five sub 2:07 runners on the start list the favourite for the women’s race is Jessica Augusto. The Portuguese will go for Rosa Mota’s 32 year-old national record of 2:23:29 on the fast Hamburg course. Meanwhile the London Olympic Marathon Champion Tiki Gelana of Ethiopia has had to withdraw because an injury. Around 16,000 runners have entered the 32nd edition of the Haspa Marathon Hamburg. “More and more elite runners realize that we can offer them very good conditions for running a fast time. This explains why the fields are so strong,” said race organiser Frank Thaleiser.

“Eliud is a very good friend. We train together and spend time together. He was the one who recommended me to run Hamburg this spring,” said Kiprotich, who also took the World Championship marathon in 2013, one year after his Olympic triumph. “I knew before that Hamburg has a good and fast course,” added Kiprotich, who has a personal best of 2:06:33. Being the first Olympic champion ever in the elite field of the Haspa Marathon Hamburg Kiprotich will wear bib number 1. “It is an honour to wear this number. I have never had a number 1 going into a marathon. This is great,” said the Olympic Champion.

While current Olympic Champion Eliud Kipchoge is currently training for a sub two hour marathon project, one might assume that he was quite a bit ahead in the training sessions. However it was different. “I was not far behind Eliud,” said Kiprotich, who hopes to run a 2:06 time on Sunday providing the weather is suitable.

While Kiprotich will be the first Olympic champion to compete in Hamburg’s elite field Tsegaye Mekonnen is the fastest runner ever entered into the race. The youngster has a PB of 2:04:32 from winning the Dubai Marathon in January 2014. A number of injuries have hampered his performance in a couple of races since. “I had a hamstring injury before running Dubai in January. So this did not go as planned,” said Mekonnen, who clocked 2:11:54 in Dubai this year. “However the preparation for Hamburg went very well. I was able to train for three months without problems. On Sunday I would like to attack the course record.”

Another Ethiopian with a very fast personal best is Tsegaye Kebede with his time of 2:04:38. Injuries dogged him for two years but, after running 2:08:45 for ninth in Tokyo in late February, he wants to show more of his old form on Sunday in Hamburg. His goal is to qualify for the World Championships in London. Tadesse Tola is another Ethiopian who is among the favourites with a PB of 2:04:49.

Jessica Augusto is the favourite for the women’s race and her best of 2:24:25 has the fastest lifetime performance in the field by a couple of minutes. The Portuguese hopes to break a significant national record on Sunday. “I want to improve the time of Rosa Mota. I think it is possible. I have trained for this and all went well,” said Augusto. Mota clocked 2:23:29 back in 1985 when finishing third in Chicago.

However Augusto could be challenged by a debutant. Viola Kibiwot is confident that she is ready for the marathon distance. “I decided to turn to the marathon back in September 2016. First the training with the longer distances was tough, but then I got used to it. I am mentally and physically ready for the marathon,” said the 33 year-old Kenyan, who has a 31:11 PB at 10 k and was fourth in the 5,000 m final of the World Championships in Moscow 2013.

Eliud Kipchoge played a role in Kibiwot’s choice of Hamburg for her debut as well. “Eliud is a good friend. I train in the same group. We are all running together, men and women,” said Viola Kibiwot. “Eliud gave me a lot of advice for my debut.”